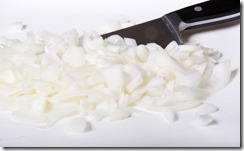 The 2nd main cause of buggy software (time pressure is #1), is laziness and boredom.

Every job in this life consists of a “core”, which is the most challenging and most exciting part of the job, and a “chore”, which is the boring and tedious part.
Let’s take a chef as an example; he is an artist whose art is producing quality food, a process that involves mixing precisely-scaled ingredients, perfectly stirred on a period of time, or fried on the grill with an artistic movement…all are actions that the chef consider as crucial part (core) of the process producing the magnificent product of his.
On the other hand, the chef sometimes has to chop onion into xxx-small size of chops, a task that may be really boring to him (I wouldn’t blame him!). Being such a boring task, the chef is tempted to getaway with just xx-small size of chops; after all 95% of the meal preparation is there! So he ships the dish to the customer.
The customer tastes it, he generally likes it, but something is wrong…”ah!”, the customer discovers, “I am chewing pieces of onion!”. He almost rated the restaurant 4.5/5, but just that last bit ruined it!
3/5 is the final rate.

Ok maybe I dwelled a lot in that example, but to some extent this is exactly what is happening with the software developer. The task consists of exciting bits of code (core) that itself is the crucial part of the solution that solves the business problem; challenging, exciting, and fun to do.
On the other hand, the developer has to do some boring and tedious coding along (chore): arranging resources, validation, checking for nulls, breaking code into concise functions, cleaning up removable bits, or disposing resources.
All these tasks are not inherently part of the core solution, but if not done properly… if the developer thought he could just getaway with xx-small chops of onions, … if he does that the software might still generally work, but it will be buggy and less of quality, which will increase the chance of customers’ disappointment, or even abandoning it for good.

Finally, it is pretty safe to say that all the developers whom I thought were the best developers, they all did their chores ALL THE TIME, no excuses; all the tedious work mentioned above is done AND sufficient unit-tests is put to ensure it is done. Their joy of delivering bug-free software is higher than the joy of just solving the mind-stimulating core problem.

4 thoughts on “On Building Quality Software”